Well played - and it didn't even kick off

How many hands did I shake last night? Let's see, eight teams of winners and runners-up from four divisions, a few players of the year, teams of the year, best looking, worst-dressed, dodgiest haircut, you name it, I handed it out at a synagogue in Edgware.

It's not the first time I've dished out silverware at a sports ceremony, so why the mention?

Well, because it wasn’t your usual footie gig, for a start. This was not the jeering, barracking spite-fest which sees lager-fueled lads swaggering up to score-settling boos and the sound of We Are The Champions. 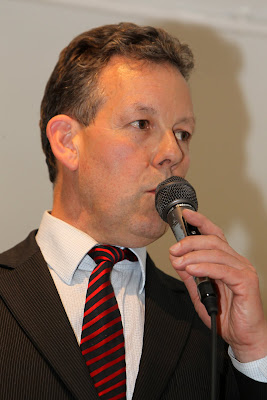 Or the heads-down kids following in the steps of their Mike Basset England manager bosses who thrust trophies in the air to cheers of “Get in their my sa’an”.

And don’t even think I’m exaggerating. I haven’t even started on the punch-up in the gents (sic) at the Dacorum Sports centre in Hemel Hempstead a few years back.

No, this was the MSFL, the biggest Jewish soccer league in the world and one populated by players who wear suits by day, play their football on a Sunday and behave themselves in kosher restaurants by night.

It was interesting that there were umpteen sides represented on the night and a couple of hundred players in the room. But to a man there was one team.

Listen, I’ve seen the crunching tackles go in, the odd 30-yarder splinter a post and a keeper flatten a defender or two who ignored his call. And I’ve heard the barracking from the fans and the odd nose-to-nose when things got a bit “tasty”. But the hard stuff stays on the pitch.

But when it came to taking the credit, they did so with a civility and generous warmth I’ve rarely experienced at this level.

You could say, they played a man’s game.
Posted by Richard Burton at 10:44 AM