It was odd to see the Newcastle journal promoting the best front page it never had by referencing the art desk’s alternative to the one it ran criticising former soccer boss Joe Kinnear's return to their local club as director of football.


After producing quite an eye-catching splash headline “A Joke”, which pretty much summed up fans' views, it then began showing the one it didn't print and explaining why.

Headlined, “We scoured the Toon to find someone backing Joe Kinnear and this is what we found”, it produced a blank space.

Not sure why they felt the need to tell readers they have more than one good idea. If every art desk gathered up all the pages it had stuck in front of the editor before being told “nearly but not quite”, or “nice try, just not for us,” it could produce a spread every month. 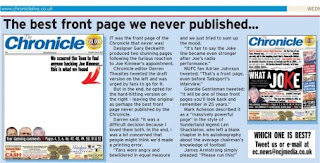 One of the perks of spending so many years on the late shifts of nationals used to be flipping through the earlier versions of pages littering the back bench, those often produced hours before you clocked on, before the cleaners binned them. Looking back, think I missed a trick.

The pages you never saw. Just have to sort the copyright.

Talking of dramatic front pages, especially those in which the emotionally charged subject of sport moves up from the back, I was highly impressed by the way the Watford Observer handled their team’s Wembley play-off defeat recently.

No cliches just a stunning long lens shot of the moment the dream ended after their former star player scored from a penalty in the dying seconds. Against a backdrop of their own fans, the players were shadowed out as mourners at their own funeral.

I saw it belatedly as I have connections in the town (worked for the paper briefly as a cub in the 70s) and was immediately struck by the effectiveness of its simplicity.

There was another agenda and more irony though. A few days earlier, I was at the game at Vicarage Road that they won to reach the final. They were playing my team, Leicester City (born there, childhood fan, shareholder).

I couldn't get a ticket. Even old investors have to apply early. So I bought one from someone local, which put me in the wrong part of the ground, surrounded by yellow shirts worn by people talking about players I'd never heard of and how crap my lot’s defence was. But, it was one of those games that ensures people live and breathe football. This is why:

It’s all square and already minutes into injury time. Our best player decides to take a dive and wins a penalty. Everyone within 100 yards of me in every direction is in shock. I can't believe we got away with it, await the goal that will send us to Wembley for the umpteenth time and sneak away with my head buried lest someone notices I'm not one of them.

Their goalie (who used to live up the road from me) somehow keeps it out – twice; legs, chest, you name it - and their nippy frontmen who'd run us ragged all afternoon, pop down the other end and score.

The pitch gets invaded. People with whom I've the opposite in common, give me hugs, kisses and handshakes as I sneak away with my head buried; past a bakers where I once worked as a student, through a park where I'd taken my kids cycling, to my car parked in a road where I used to walk my first girlfriend’s dog.

One of my sons who'd watched the game live on his laptop rang to console as I listened to their fans still singing in the stadium a mile away and I consoled myself that, at least, there may well be premiership games nearby next season.

When I got home I trawled YouTube for fan videos of the travesty I'd just witnessed and found one taken a few feet to my right (if you're really observant, I'm the one whose face looks like the bloke in Gladiator when he arrived home) and dreamed about all the other Wembley playoffs, taking my son to the City guest box or my dad to the terraces when I couldn't get an invite and Colin Randall on the Telegraph news desk found me a last-minute tout.

Then the next day, I saw the Leicester Mercury with the headline “We thought it was all over - it is now”. Now that was cliched. It was as if, still in shock, no-one could be bothered.

I know which paper I'd rather have been editing that week.

Posted by Richard Burton at 4:01 AM