A word from Jack

It was good of Jack Straw to side with Fulham and Hammersmith Chronicle in their battle with the local council over its town-hall produced local newspaper. He is reported as telling the The Newspaper Society: “I am on the side of the papers and not the councils.” 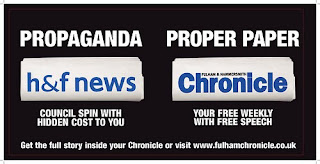 The Trinity-owned paper launched a campaign on its front page and is embarking on a two-week outdoor advertising push on key sites around the borough including eight 48 sheet posters. An ad van even drove around Parliament before moving on to the Hammersmith and Fulham area where it pulled up outside David Cameron’s house.

No paper wants to fall out with its local council any more than it has to when reminding it how it should be doing its job properly and this wasn’t an expense they entered into lightly.

So, it shows very little understanding on the part of the Justice Secretary when he refers to one of the many battles being fought all over the provinces as a “spat”.

Then again, maybe he’ll prove that cynicism misplaced by having a word in the right ear and actually do something about it.
Posted by Richard Burton at 11:17 AM No comments:

The debate on the future of print media has never been quite so succinctly put. I saw this about an hour ago and thought it worth a wider audience. One tip: do watch to the end.
Posted by Richard Burton at 11:01 AM No comments:

A farewell to Peter Rose

Another of Fleet Street's finest left us last week, thankfully a lot later than first feared but, sadly, many years before he should have done.

Peter Rose, a mere 53 and the Mail's one-time chief crime reporter, died after what he would have called (were he writing about someone else) “a brave fight” against a liver disorder following years of conviviality in the pursuit of copy.

It's a tragic loss. Journalism has lost one of the old school, three kids have lost a father and I have lost a mate. 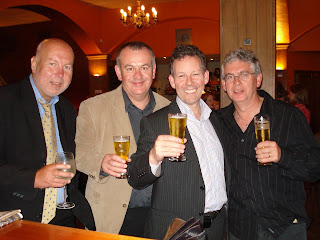 I'd known him for 36 years and the Pete that died last week was unashamedly the same one I first met outside a courthouse in St Albans back in the mid-seventies: a softly-spoken, dry-witted true gent tailor-made for getting the very best out of a good old-fashioned crime beat.

A series of scoops on just about every major murderer from Myra Hindley to Fred West saw him elevated to the presidency of the Crime Reporters' Association.

We hadn't seen each other for a few years when Ross Francis of Fairley and Simmons rang to break the news that Pete “probably wouldn't last the summer”.

Pete had asked him get in touch with myself and Jim Last, formerly of Home Counties Newspapers, for one last get-together. Hard as that was to hear, we did so with relish and so, on a winter's evening in the Harrow in Whitefriars Street, four former cub reporters met to relive the days when they cut their teeth on a typically gutsy, punch-above-your-weight news agency run off the slave labour of those who'd work for peanuts just to run with the pack.

It wasn’t exactly the playing fields of Eton, but the bonds from those days were strong and enduring. Over the years our paths crossed frequently; one would either put in a word for, team up with, take on or just find themselves sitting alongside, one or the other in some newspaper in some part of the country.

One memorable occasion was in 1979, a few years after the agency had folded. I'd joined the Herts Advertiser in St Albans (a job brokered by a call from Pete who was on the sister Hemel Mail), I'd got Jim on board after one of the seniors had a strop with the newsdesk and quit and Ross was freelancing from his own office a few streets away. I'd been out and snagged what was to be my first HA splash, we all met in a pub round the corner, conspired on an intro to what was a convoluted yarn involving asylum seekers, I went back and claimed the byline and Ross waited until the early hours to flog it around the dailies.

Ross coined it in, slipped me a tenner, Jim chased a follow-up for the following week and Pete sat back and sniggered something about me being “stitched”. I was too young to know better.

The reunions, few as they were in the event, were pub crawls, of course. Pete felt at home, we swapped anecdotes and frightened tourists with noisy, huggy, goodbyes outside the old PA building.

A boozy night out may sound odd, given his condition. But his philosophy was simple: “This is me, this is the life I've lived. No regrets.” He wasn't going to change.

Peter Rose was the reporter's reporter who never wanted to grow up. He lived Life on Mars; he never left the seventies. He had a notebook, a mobile that just made calls, no email address I was aware of, and more snouts than a bacon factory.

To do his tie up fully, to appease an advertiser, to say anything nice about subs, would have been to sell-out. When the agency launched a features arm, I seem to recall he was the only one who didn't want to waste his time “knocking out fluff for Woman's Own”.

He was all about integrity, about patience, and about getting it right. He was never about sensationalism for its own sake – and never about giving up.

They were old-school ethics. But, there again, as Press gazette pointed out in its obit, he was just that.

Once, during one of those reunions, he asked me what I'd been up to that day. I said I'd been in a meeting about mobile apps with partners who'd been helping us formulate a social networking strategy.

He pursed his lips as I spoke, as if he'd recalled a joke, nodded a few times, then looked over my shoulder at the others and said: “What the fuck is he talking about?”
Posted by Richard Burton at 10:41 AM No comments: